Let me tell you what I've been doing in the last month.  Let me start out by saying that I'm out of practice with my blog writing so this will be a bit of a list of things

First off our house we bought last year in Yuma has sold.  Not for what we bought it for but at least it's gone and I can move on from that.

Second the kittens and I got to spend a few days in the desert at our favorite spot.  That was the first time I'd taken the new tow car out there and I did look at the tires when I bought it and they looked ok but I was testing it by taking it out there.  From there I drove over to Lakeside in San Diego county to visit my daughter. 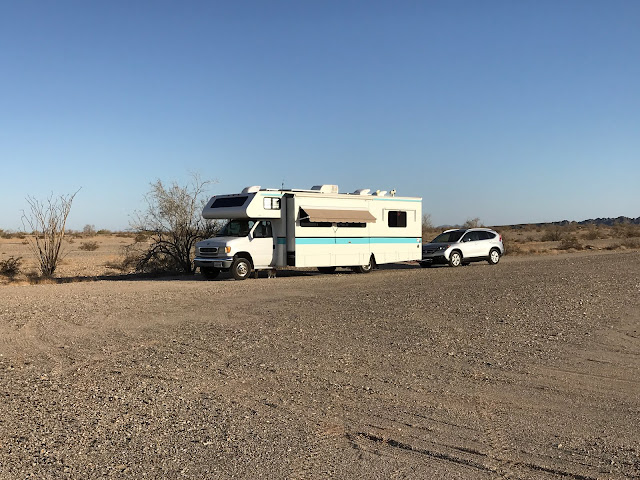 After unhooking the Honda decided to drive to the store.  Nope not just yet. Yes I have a flat tire.  Called road service and they changed it in a jiffy.  Next day it was off to Costco to use my year end credit to buy 4 new Michelins for the Honda. 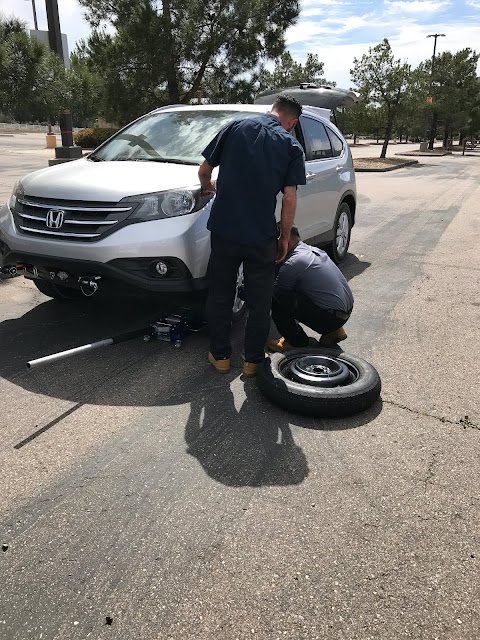 Next it was my solar batteries.  I can't remember what Larry at Starlight Solar called this but I call it swollen battery syndrome.  It's has happened to me with my cell phones, my jetpac for wifi and now with my solar batteries. 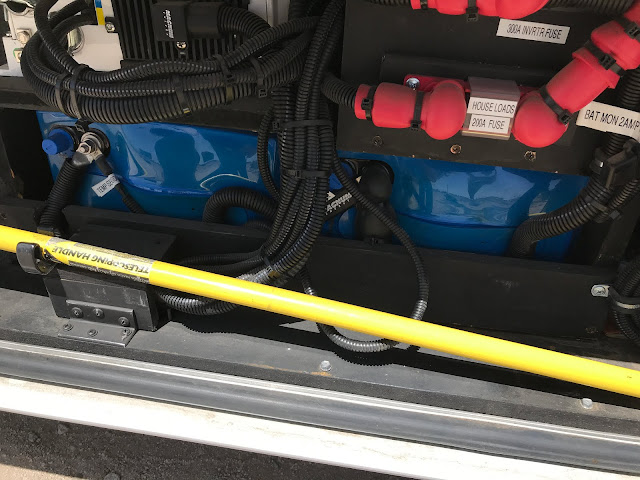 Batteries are on their sides with a nice black box build around them. 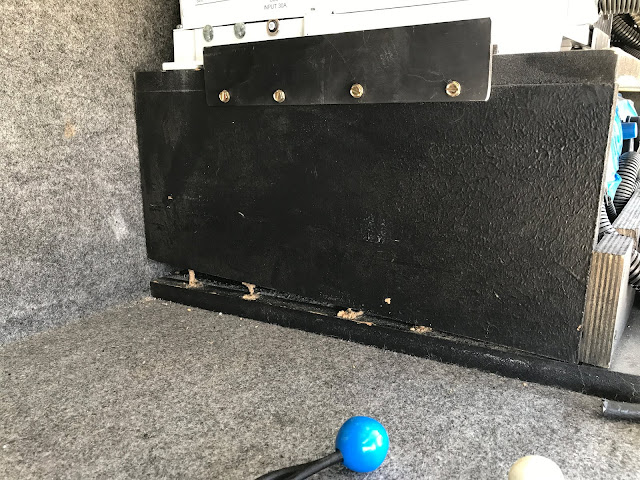 See how they popped the screws loose on the box and that's my inverter on top. 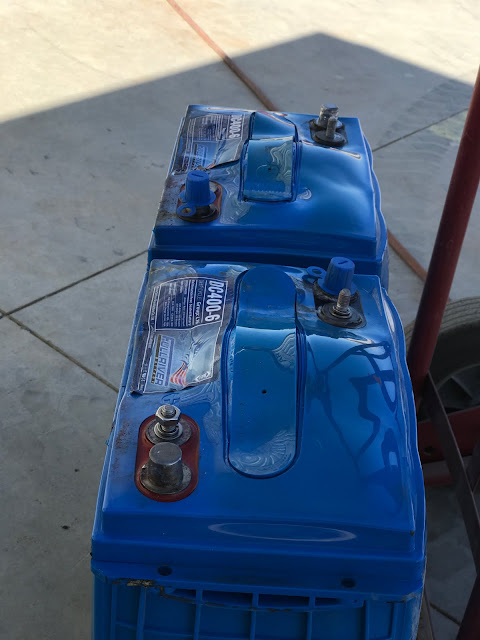 In all the years that Larry has been doing solar he has never seen this, yup, I'm super charged. 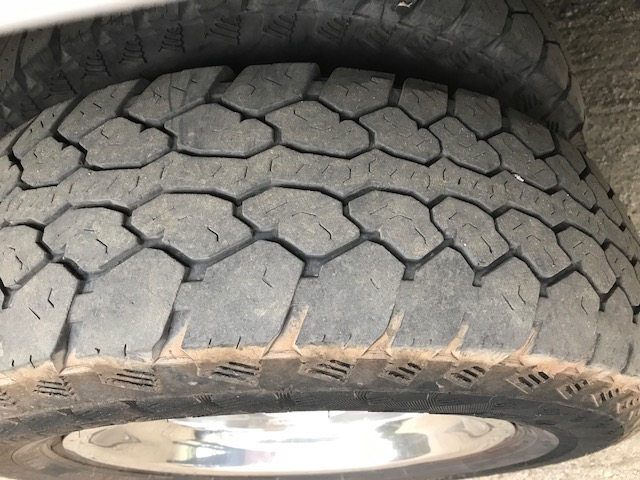 Then it was time for a tire problem on the rv.  I put these tires on the rear 3 years ago.  My rv had these nifty valve stem extenders that you can see in the next picture.  The extenders are very handy when airing the tires, but as the tire guy later showed me, they are notorious for leaking.  I knew I had a slow leak back there but I wasn't very good about checking my tire pressure.  And this is the result of low tire pressure.  Off to the tire store I went and the tire guy noticed that my 1 year old tires on the front were wearing unevenly, the result of the front end being out of alignment.  So moved the front Michelins to the right rear and bought new Michelins for the front.  Also did a front end alignment.  The silver lining in this was the tire guy mentioned to me that some rv clubs offer tire discounts and I said yes I belong to FMCA but they didn't list my size tire on the Michelin discount page and he said that didn't matter.  So he saved my $85 on each tire.  Wow. 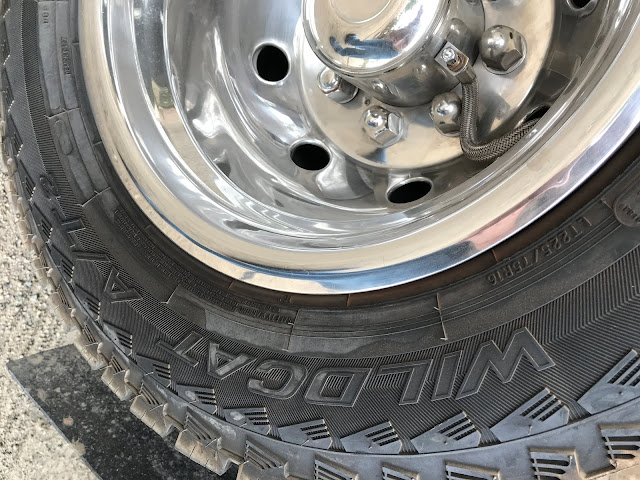 Next was the tree.  No I didn't back into it, I hit it with my tail swing.  That's red tree bark you're seeing.  It pulled the back panel of the rv away from the side.  More on this in a few minutes. 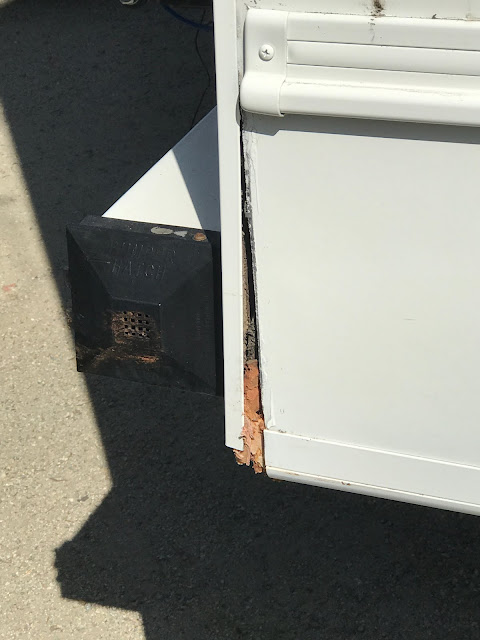 What I don't have any pictures of is the rv breaking down on the side of the road.  It could have worse, I'd just gotten of a busy freeway and was on a country road with plenty of space to get off the roadway.  I'm sorry to say that my road service let me down big time.  They were unable to produce a tow truck that could do the job.  But the really bright spot is that when this happened I had called my tire guy, even though this was an engine problem, to ask him if he could recommend a place to have the rv towed to and he gave me the name and number of a young man who has a mobile engine repair business. 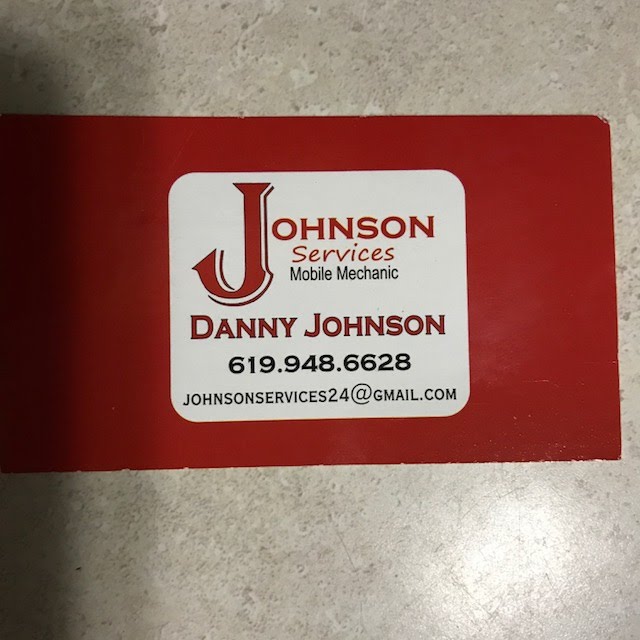 Danny got to me within 20 minutes and had me back on the road in 1 hour.  So what happened?  My rv is on the Ford chassis running the Ford v10 engine.  The 4th spark plug on the drivers side backed it's self out of its hole, bless its little heart.  The spark plug was actually lying on the engine.  When he pulled the dog house off from inside he reached in and pulled it out.  When I told him on the phone what the engine was doing he made a guess that this was the problem.  This isn't the first time he's seen this.  He came prepared.  He had to tap new threads into the hole, my terms not his, and install a new plug.  And I was on my way in an hour.  I was only 1/2 a mile from the rv park I was heading to and when I got there and settled in I was done for the day although I had other things I needed to do.  The next day I called Danny back and had him come do a tune up of sorts, he came back up to my site and replaced all 10 spark plugs, and coil wires as well.  I didn't want to drive it anywhere until he had done that.  When I called him to set that up, he said he was going to mention it to me but he didn't want me to think he was trying to sell me something I didn't want or need.  He is such a nice young man, just stating out with his business.  This kid can do anything.  Which brings us back to the tree and my rear end.  When I showed him what I'd done he thought a minute and said we could just screw it back together and that's what we did.  He had some self tapping screws and I pushed the rear panel back into place and he screwed it together. 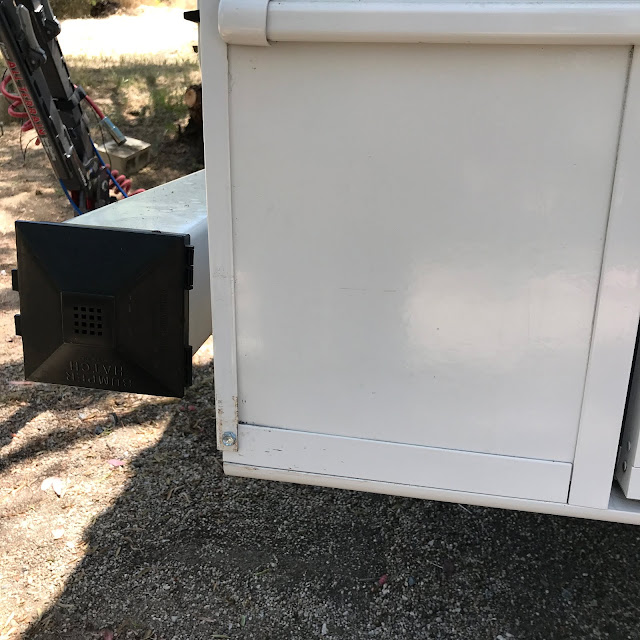 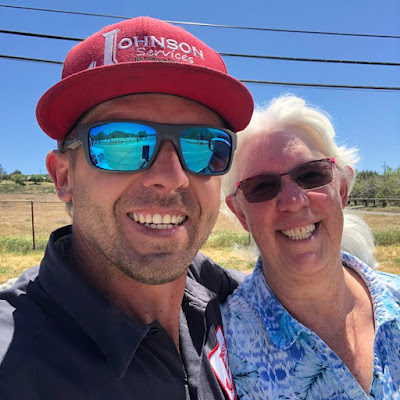 He took a selfie of us. This is his facebook page here.

There have been some bright spots in the 3 weeks I've been here.  I've helped my daughter get moved into her new home.  I spent two days cleaning the house before she moved and the day she moved I cat sat her kitty, Willie Mays. 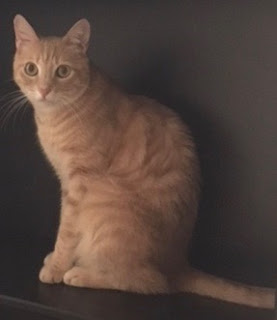 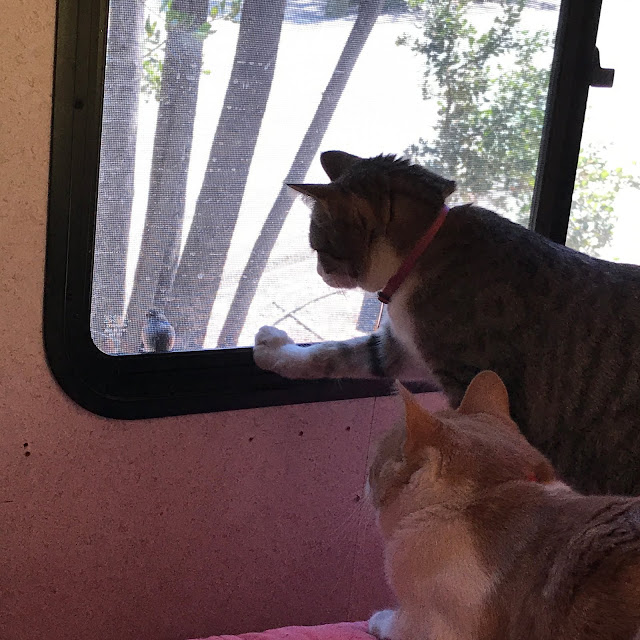 Here's Bubba and Missie making friends with a small bird. 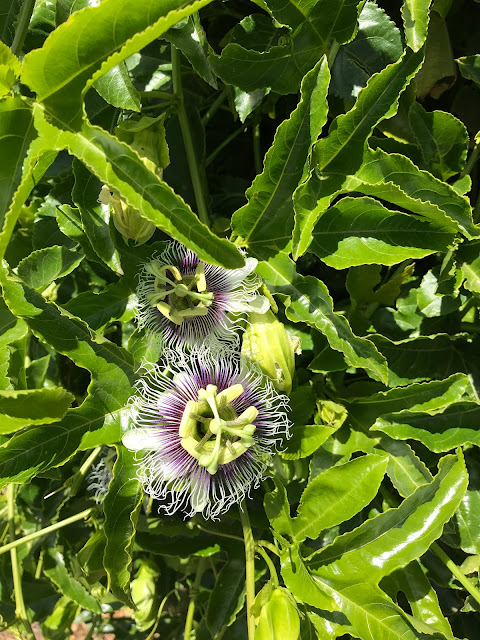 Spring is in full swing around here.  Every time I step outside the sweet perfume of spring flowers fills the air, it's wonderful. 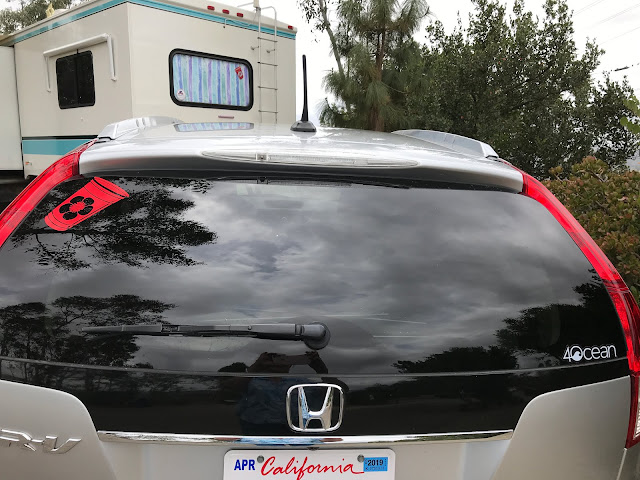 I got the Honda registered in California and did a little customization on the rear window.  The red solo cup decal if from a group I belong to made up of solo women who rv and the 4Ocean is an organization I donate to that cleans up plastic from the ocean.  If you'd like to learn more about them click here. 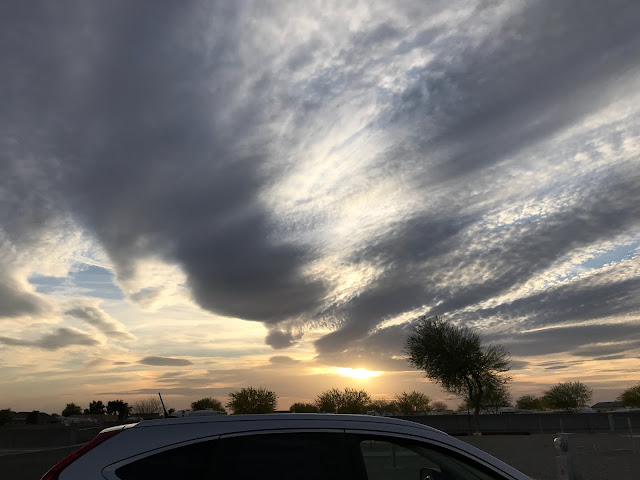 I miss my mom terribly I can't even write about it,  I find myself thinking of things to tell her,  I sometimes forget that she's not here.  I'm just taking things one day at a time.

Second, because, when I started this blog it was about mom and my adventures, it doesn't seem right to just keep going with this one, and just changing the name of this blog will change it back from the beginning, so on that note I'm starting another blog that will be about my adventures,  from now on. 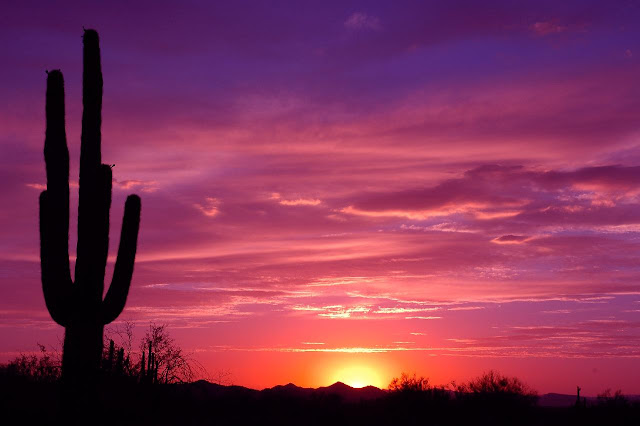 So as the sunsets on this chapter of my life the sun is rising on the next chapter.

I hope to see you over at,

Evie
Full timer rver since 2013, United States
In 2013 I bought a 2001 Winnebago Minnie and my mom and I started rving around the southwest. After the first 6 months we decided to go home and sell both our homes and travel full time and we did that together until April 2018, when she passed away. I now travel full time with our two cats and will continue to do that until I've seen every cotton pickin' thing I want to see.